‘There is no greater agony than bearing an untold story inside of you.” This is one of the many prolific quotes Maya Angelou bestowed upon us within her autobiography I Know Why The Caged Bird Sings. This very quote is paraphrased in a key moment of Fiksation, Blood and Water‘s pilot episode, as the protagonist is gifted a journal, the journal she will use to try and unravel the mystery of her sister’s kidnapping. Blood and Water welcomes us to the world of teen-melodrama/YA fiction and to say I am geeking, would be an understatement. I’m experiencing a dream I’ve had since primary school; the dream of seeing a young-adult series of scale centered around the lives of predominantly black suburban youth. It was with that excitement of representation that I jumped into watching Blood and Water, if not necessarily for me now but for the pre-teen to adolescent me who consumed content like High School Musical, Twilight, Glee and Gossip Girl growing up.

Blood and Water is Netflix’s second script-to-screen original African series, following Queen Sono. Blood and Water is introduced to us through its central character Puleng Khumalo, played by Ama Qamata; a 15-16 year old girl whose life is continuously shadowed by the grief and mystery surrounding her older sister, Phume, who was kidnapped from the hospital as a baby. The story begins at the Khumalo household on Phume’s 17th birthday where there is a full-day birthday party/wake happening. Puleng is being coaxed by her best friend, Zama, to sneak out and go to a mansion party across town, which she declines. However after being forced to endure a party filled with elder guests she doesn’t know, and forced by her mother to be Phume’s surrogate by blowing out the candles of her estranged sister’s large birthday cake, she decides to go. Puleng and Zama uber across town to the mansion party, at which upon arrival, Zama ditches Puleng to spend some private time with her male conquest leaving Puleng to navigate this teen party alone. We get introduced to the more private-school rich party side of Cape Town as Puleng makes some friends at this party and mistakenly stumbles upon some information that ignites her own personal interest in her sister’s mystery. Will she be able to solve the mystery of the missing sister she never met amongst all the unraveling drama that comes with high school drama? Blood and Water has a lot of the hallmarks of an entertaining teen drama coupled with its mystery elements; coming of age romantic/sexual experiences, back-stabbings, slaps, angst, melodrama, bad communication etc. 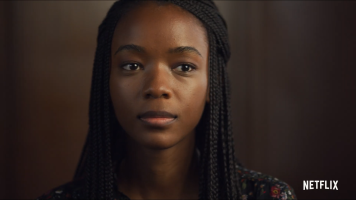 Representation as a conversation sometimes gets to overly-convoluted spaces where it feels like just a catch-all buzzword, but there was a truthfully indescribable sense of pride and emotion I felt watching this show because of its approach to representation, especially in its miniature. The black mid-class/suburban experience is relatively uncharted territory on South African screens, both big and small, despite the growing population who have its sensibilities and/or desires.  Its appeal cannot be understated and has yielded cult-like followings from the runaway-successes of Happiness is A Four Letter Word to the one-season turn of Ayeye, whose fans are still begging for a second season half a decade after it premiered. Blood and Water adds itself to that list, whilst targeting another under-serviced sub-category of viewers on mainstream platforms, teenagers and young adults of most demographics. In the pantheon of teenage dramas that exist, Blood and Water doesn’t break major ground on a plot-level. Its revolutionary appeal comes in allowing us to see it in our image, and have it done so beautifully. It’s refreshing to see a Puleng as the fish-out-of-water character central to the drama, or unravelling a Fikile who feels the need to be idyllic and perfect to prove her success comes from more than just a wealthy family, when attacked by Wendy. Wade is one of my favourite characters as the moral and supportive friend, emboldened by Dillon Windvogel’s natural yet quirky comedic timing whilst Thabang Molaba’s Karabo provides softer edges to the typical bad-boy archetype. Having all of these characters live in the same world and not as tokens is refreshing, especially once their characters develop further outside of their archetypes; the more their stories develop, mature and/or unravel.

Puleng and KB Blood and Water 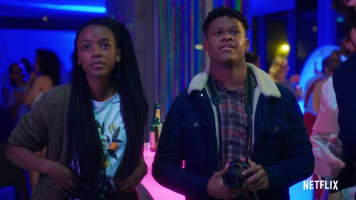 Puleng and Wade Blood and Water

Produced by Gambit Films with a script and directing team lead by Nosipho Dumisa, Blood and Water really does offer some stunning moments in visual and text. From the use of Cape Town as a backdrop, exploring some of its lavish sights to its motifs; the way the show opens like a chapter with papers scattered everywhere and ends in a similar fashion. Blood and Water has a light yet continuous exploration of the way we can and could interact with various pieces of texts; within educational spaces to more places of prose. Within the wider moments of teen melodrama and mystery, there are these quiet and subtle moments that place African history and art on the same playing field as their European counterparts. Whether it’s Natasha Thahane’s Wendy challenging the inclusion and necessity of exploring the effects of Leopold II of Belgium in Congo with the same weight our education system explores the Holocaust or casually having a Nasty C quote flow in the same conversation as one with Sylvia Plath. Whilst the show is not without its criticisms and shortfalls, it provides a fresh perspective that teases a lot of interesting ground it can pursue further within future seasons. One of its main shortfalls for me being that it greatly simmers without ever fully climaxing, especially on its central conflicts. This is a trait it shares with the inaugural Netflix Original Queen Sono, both shows have 6-episodes seasons that seem to end at what feels like the start of the season’s climax. Blood and Water ends at a major turning point that aligns the key central conflict without fully addressing it or subverting it, and a similar thing happens with Queen Sono. It feels like we’re left hanging at the height of the season’s drama without the climax or subversion of either show’s main arc. I understand the suspense mechanism that can be used to propel a prospective second season in with relentless action however if the show doesn’t return there are too many dangling threads and unanswered questions. Is it possible for future Netflix Original local shows and seasons have more episodes to cover their ground? 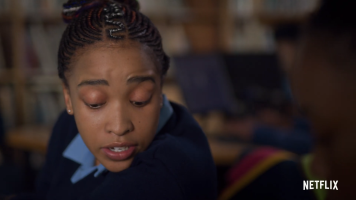 Zama in Blood and Water 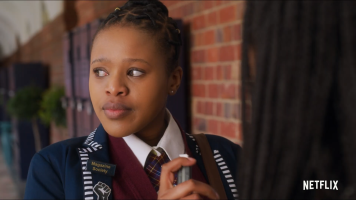 Wendy in Blood and Water 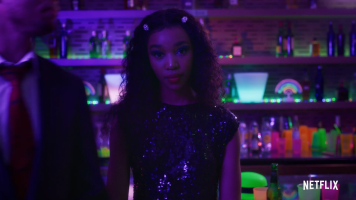 Dillon Windvogel as Wade in Blood and Water

The success of Blood and Water has been an exhilarating experience to witness, seeing it tap into the youthful zeitgeist in a way I’ve truthfully not seen before, especially amongst demographics younger than me. There is no greater agony than bearing an untold story; more and more we’re getting to see the birth of different types of stories and settings within a South African and larger African context. As someone whose spent a great deal of my formative years writing stories and scripts centred on the coming-of-age experience, it’s exciting to live in a time where these stories have a greater a chance of being explored locally. Blood and Water was a dream experienced, reinvigorated and energized for me and it’s a wonder to think what it could mean for a prospective adolescent storyteller, seeing a wider range of content that they can emulate, innovate and realistically envision themselves in. To paraphrase Sylvia Plath, I may never be happy but tonight I’m content; my inner-teenager slept content because of Blood and Water.