There are few people I know as young and accomplished as this week’s feature. At just 23, Mbalizethu Zulu is a SAFTA-nominated writer for Mzansi Magic’s top export, Isibaya. This KZN born, Piet Rietif raised, young woman is rapidly making a name for herself in the entertainment industry. By the time she was 21, she had written on three Mzansi Magic Movies; Ilizwi (2015), The Ring (2015) and Forgotten (2016), with lead credit on Forgotten, as part of M-Net’s inaugural Magic in Motion Academy. She quickly followed that up by making her sole directorial debut on a self-penned short under the guidance of Bongiwe Selane, acclaimed producer of Happiness is a Four Letter Word.

Her extensive credits speak volumes as to why she’s well on her way to being one of the next generation’s great storytellers. She has an incredibly knack for writing, a skill she’s been honing since she was a child. Her writing is graced by an incredibly poetic flare underpinned by a grand drama that reads like a novel. Her stories are usually filled and lead by emotionally complex strong-willed women; her short film, Nompilo, follows an emotionally scarred woman seeking revenge from her Alzeihmer’s diagnosed mother who allowed her father to emotionally and physically abuse her as a child. Her next directorial project, The First Wife, follows an ambitious young woman forced to marry a man who is in love with her younger sister. 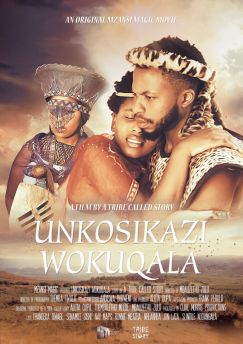 Her storylines and the complex issues they tackle make her like one of her idols, Shonda Rhimes, but the Shonda Rhimes comparisons don’t stop there. This week Mbali earned her first of three executively produced credits as a co-founder of A Tribe Called Story, a production company who currently have a three-picture deal with Mzansi Magic. She serves as the scriptwriter for all three of these films and directs one of them. Did I mention that she’s only 23? Mbalizethu is a trailblazer making major moves and growing her portfolio in the industry. With the momentum she’s building and as her writing and producing skills mature and grow it’s not hard seeing her becoming an industry titan.