2018 has found me making a concerted effort to become more versed in the burgeoning independent scene of South Africa’s creative industry. One of the most promising voices I’ve discovered is the focus of this article, That Ego. Ego is a 24 year old rapper/producer representing Mpumalanga and is not new to this blog. He was featured in our first edition of South African Artists You Shouldn’t Sleep on. He recently dropped his first full project titled, Regrets. With 11 songs coming in with a paced length of 38 minutes, Regrets is an LP-length tape that serves as a taste of what could be expected when his official debut album drops next year. 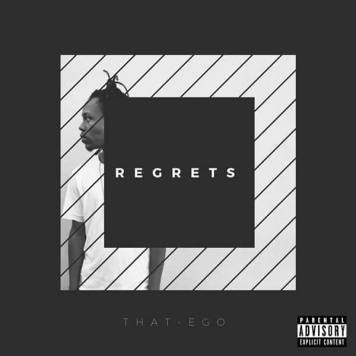 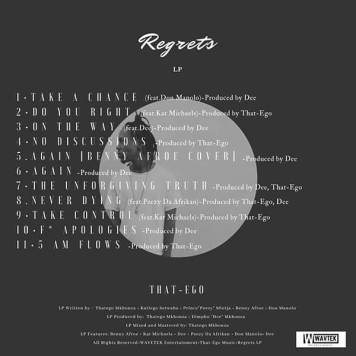 Regrets kicks off with the record’s most infectious banger, Take A Chance. Built upon a robust radio-ready trap production, That Ego and Don Manolo lay down the record’s mission statement; asking their love interests, and on a more thematic level the audience, to take a chance on them. Take a Chance also introduces the main storyline running through the record, Ego working through a turbulent relationship whilst fighting his inner demons. Don Manolo provides a commanding performance as the featured artist, performing the track’s multilayered chorus with enough swaggered delivery to balance out Ego’s emotive verses against the track’s frenetic production. Do You Right is a soulful hip-hop number with Kat Michaels that continues on themes of turbulence and missed opportunities within relationships.

Following Do You Right, Regrets segue-ways into an arc of modern minimalist hip-hop with tracks that include promotional singles Again and No Discussions. That Ego flexes some braggadocio-laden proclamations of what he has and will achieve as an ambitious artist on the come up. At this point, there have been a few allusions as to why the project is called Regrets but none that solidify it more than The Unforgiving Truth. Backed by a running vocal sample and a beat reminiscent of classic mid 2000’s hip-hop, The Unforgiving Truth explores a lot of That Ego’s mental state. That Ego is at his most candid as he talks about dealing with depression, suicidal thoughts and a lot of the regrets harbored from his life, family and relationships. The Unforgiving Truth stands as the only song without a discernible chorus and really serves to give the listener a glimpse of who Ego is at his core.

Although it’s not credited as his official debut album, Regrets is in an incredibly strong offering from an artist who’s clearly studied the game from multiple angles. Ego and his team have a great understanding of how to craft anthems. Almost every song is filled with great hooks that are either ear worms or maxims primed for audience participation within a live setting. The promise in an artist like Ego lies in the level of creative control he’s able to exert into his projects. He not only raps but mixed, mastered and co-produced Regrets. That type of understanding when continuously nurtured properly is what can make him become one of the sonic auteurs of hip-hop’s next generation.

One thought on “That Fire Tape: That Ego’s Regrets”